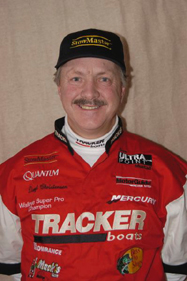 Daryl has delivered presentations to tens of thousands of anglers in over 100 cities in 20 states and two Canadian provinces on bass, northern pike, muskie and walleye fishing covering fish location, important timetables, effective lure presentation and proper equipment with full-color professional slides and distribution of catalogs and/or samples to enhance product endorsement.

Daryl has been spotlighted on national, regional, state and local television, radio and program appearances, including TNN, ESPN and ESPN2, on shows with over 200 million viewers such as In-Fisherman, Discover Wisconsin and many others.

Daryl has authored the following books: Journal of a Walleye Pro, Walleye Jigging Tips, Fishin’ with a Mission, Fishing the Wisconsin Largemouth Bass, and Your Complete Guide to Montello and Buffalo Lake Fishing.

Daryl was featured as the exclusive angler in Jigging Walleyes A to Z in the Masters of Walleye video series and featured in Walleye Tactics, Tips and Tales, a book by the North American Fishing Club.

Newsletter »Be the first to know about new products and special offers!